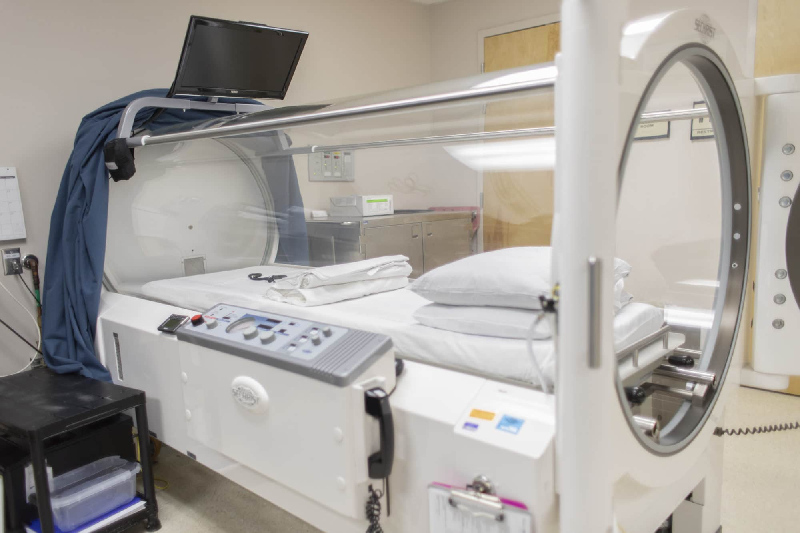 There are various medical conditions that respond extremely positively to high concentrations of oxygenation and these are very often administered through a course of treatment known as hyperbaric oxygen therapy (HBOT). It necessitates breathing 100% of oxygen while under increasing atmospheric pressure. This is delivered through a compression chamber and was initially developed to combat decompression sickness, or the bends as it is also known, in scuba divers.

It has the effect of reducing air bubbles which form and expand in the body, if resurfacing too quickly. It basically convinces the brain of the sufferer that it has returned to the depth that they were previously diving, it then decompresses, allowing the volume of bubbles in the body to gradually reduce. Without this treatment the condition can be life threatening in a matter of hours.

An individual will normally be required to lie down on a table, which then slides itself into a clear plastic tube. The chamber has an ambient pressure within it which is three times greater than that of the air pressure that a normal person would breathe, with the duration spent in the chamber ranging from as little as 30 minutes, right up to as much as 5 hours.

Hyperbaric oxygen therapy can also be used to treat ailments such as: carbon monoxide poisoning, severe burns, brain infections, anemia following extreme blood loss, bone marrow infection, radiation injury and spinal trauma. Additionally, this form of therapy can succeed in the saving of limbs from potential amputation, through its ability to accelerate the healing of wounds, which may have been unresponsive to other treatments.

HBOT is usually an outpatient procedure, and a doctor will recommend a certain number of sessions, depending on a person’s condition. One session can often do the trick, but others can require repeated treatments of half a dozen or more. There is a growing call for it to be given official approval to be used as a form of alternative therapy for conditions such as: cerebral palsy, autism, attention defect hyperactivity disorder (ADHD) and post traumatic stress disorder (PTSD).

However, the authorities require continued research and greater evidence before declaring it safe and effective in these environments. The caution is due to the fact that inappropriate use of hyperbaric oxygen therapy can lead to a number of adverse effects, including: pain and damage to eyes, ears, sinuses, lungs and teeth; plus people can experience high anxiety, increase in blood pressure and even collapsed lungs.

Interestingly, animals can also benefit from this type of therapy, with race horse owners particularly keen to take advantage of treatment, as it can literally be worth a fortune to them to keep their valuable thoroughbred in racing condition. Domestic pets are also recipients post surgery, with both cats and dogs regularly having their recoveries speeded up by the process.

When used alongside other drugs and therapies, or as part of a wider plan; it is fair to say, hyperbaric oxygen therapy is a very safe procedure. Complications are extremely rare, and the benefits are potentially huge.

Turn Your Interest In Helping Kids With Nutrition Into A Business

About Aetna Coverage For Inpatient and Outpatient Treatment

Tips to consider while selecting a right physiotherapist